Quote: “Spring is useless! None of you protected me from him! Not one of you!”

Background: With her memories of her Durance as fresh as they are, in addition to being raped by a member of her own Court, Rosita is deeply mistrustful of others, and tends to see every stranger as a potential threat, until proven otherwise.

After being raped, Rosita became extremely withdrawn and quiet, nursing a hurt she would not allow her Court to see or heal. She began to feel that no one (at least, no one in the Emerald Court) could protect her from threats internal and external, real and perceived. This suspicion was “proven” for her when she and Cedric the Satyr were ambushed by a Summer Court motley in Little Haiti, after the disaster at Mariposa’s, and Cedric was shot dead before the chase had even begun.

Description:Rosita is thin and willowy, with curly hair that falls about her shoulders in ringlets like tawny vines. With the acquisition of her new Mantle, Rosita’s leaves and buds are now withered and dark, and coated with a thin coating of hoarfrost.

Storytelling Hints: Rosita feels that she has every good reason to be suspicious, mistrustful, and deeply angry. 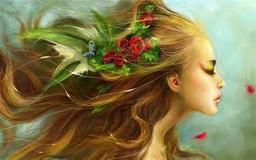