Creepy night-terror researcher for the University of Miami

Background: Johnny Shanks has been with the Autumn court for some time now, serving faithfully and doing his fair share of the work, though his service hasn’t been especially exceptional. Some think that he just doesn’t like the limelight, and would rather be left alone to harvest Glamour from his night-terror research subjects in (relative) peace.

Description: Johnny’s voice is soft and soothing, to match his voice. Though he has an excellent bedside manner, many of his patients grow leery of him after a time, since their night-terrors never seem to get any better under his care. Dr. Shanks is a wiry, whip-thin man (though not very tall), with the soft, café au lait skin of a man who spends most of his time indoors, not engaging in any form of strenuous labor.

Dr. Shanks ethnicity is up for debate. African? West Indies? Native American? Mixed? The doctor doesn’t talk about it, and nobody brings it up.

Behind his Mask, a pair of slightly-mismatched horns curl out from the sides of Johnny’s head, more like freakish “extras” than symbols of any great strength. His skin is mottled with a tracery of fine whitish veins just beneath the skin, like the leaves of a variegated creeper-vine.

Storytelling Hints: Johnny is a scientist first an foremost. He prefers, generally, to be left alone to do his research, though this has been difficult lately, since the death of Prof. Goldstein left him as the next most senior Autumn courtier with a fair-sized body of medical knowledge. 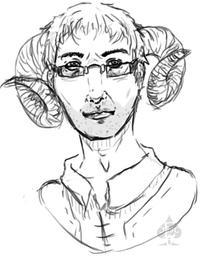