Sheriff of the City of Eternal Summer

Background: Ivan has been Sheriff of the City of Eternal Summer since its inception, and was Grandfather Thunder‘s bodyguard for years before that. No one in the Trident knows exactly where he came from, or why he’s so loyal to Thunder, but Ivan apparently has no compunction against doing the dirtiest of Thunder’s dirty-work, up to and including the murder of Tom Hood back when Thunder first staged his coup.

Description: Almost seven feet tall and topping 350 pounds, Ivan is an ugly wall of hulking muscle and sadistic grin. Unless attending a Court function (in which case he crams himself into a specially-tailored tuxedo), he tends to dress like a drifter: layers of frayed, torn, and dirty clothes, sturdy boots, and a wool cap pulled down low over his head. Ivan’s Mask is ugly; his mien is horrendous, with skin the purplish color of a new bruise and a face that looks like it’s taken a trip through a meat-grinder.

Storytelling Hints: Deathless Ivan rarely speaks, and when he does, it is in a voice utterly devoid of passion or life. Those who have seen him smile have reported that they would rather face the entire Wild Hunt without even an iron nail to defend themselves rather than see that smile directed at them. 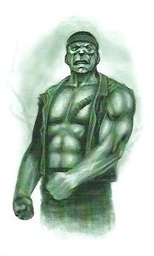