The diary of a little girl from the mid-70s.

The small pink book with the battered cover is the diary of a little girl named Hannah-Jane, who was eight-and-a-half in 1976. Her favorite thing in the world is horses, and she hopes to live on a horse ranch someday when she’s a grownup. She sometimes pretends she’s a princess, especially when her parents fight, but she’s old enough now to realize that it’s just pretend.

The final entry is the day before Hannah’s ninth birthday.

Edit: The diary was written by the woman now known as Blue Jenny. 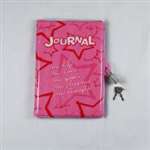