Quote: “This is the last time, the LAST TIME, that I fix this for you! Do you hear me?!”

Background: Willard has been Chief Engineer of the Gossamer for almost as long as she’s been in the water. He knows her inside and out, and it pains him to see the disrepair she’s fallen into. Willard’s damnable persistence takes the lion’s share of the credit for the fact that she’s still running, but there’s only so much one Engineman can do, even a very talented one, when the funding dries up and the salt starts corroding the hull.

Description: Seaman Seacrest is a scruffy-looking older man, with a full beard fading from gray to whitish-gray. He’s hunched and small-framed from the time he spends below-decks, squeezing between hot machines with moving parts. While he’s on-duty he wears a faded blue button-down shirt and work-jeans, which are typically smeared with engine oil and blackened with small burn-marks.

Storytelling Hints: It can take years to win Willard’s respect, and even longer to gain his trust. He sees laziness as a mortal sin, given how feverishly he works to keep the Gossamer afloat. He has absolutely no patience for “useless people” (i.e., anyone who lacks practical skills with machines or engines). 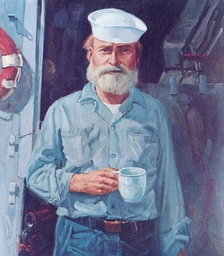