"Guardiner" of the Everglades; honorary member of the Spring Court

Quote: “You shouldn’t have come here.”

Background: The Green Man is an old friend of Grandfather Thunder. Indeed, the two of them escaped from the same Keeper, and for many years were closer than brothers. As the strain of ruling began to warp Thunder’s personality, the Green Man was his staunchest ally and adviser. Many said he was the only man whose outright defiance Thunder was willing to tolerate.

Some decades ago, well before the coup, Thunder and the Green Man had a falling-out, and the Green Man retreated to the Everglades, shedding his Mantle and becoming Courtless, living out a lonely-but-peaceful existence in the Everglades and the Hedge outside Miami. According to Freehold lore, it is around this time that the Green Man began to be known as “Swamp Thing”, a comic-book character with whom he shared and uncanny resemblance.

When Grandfather Thunder staged his Coup and drove Isabel Espina and her Court of Spring was driven into the Everglades, Swamp Thing took pity on them, and allowed them to use his Hollow as a place of refuge. For this, he was offered a place in the Court, but he refused to take another Mantle, opting instead for a generous helping of Court Goodwill. There is perhaps no other person outside the Antler Crown who is so beloved and respected by Spring courtiers.

Description: You can stare into those places where the evening has pooled beneath the distant trees, and glimpse an ambiguous shifting of the darkness: something large, large and slow, its movements solemn and inevitable, heavy with clotted, sodden weed that forms its flesh. Its skeleton of tortured root creaks with each funereal pace, protesting at the damp and sullen weight. Within their sockets its eyes float like blood-poppies in puddles of ink.

You inhale through flared nostrils, drinking in its musk, green and pungent. There is the scent of mosses and lichens adorning its flanks. There is the dry and acrid aftertaste of the pinmold that spreads across its shoulders, fanning out like a dull gray rash.

You can stand in the blind darkness and know that were you to raise your arm, reaching out to its fullest extremity, your fingernails would something wet, something supple and resilient.

Swamp Thing is a big man, but not unnaturally tall. He is broad and muscular, and projects an aura of incredible stability, strength, and vitality. His high Wyrd creates a large and highly-noticeable change in the Hedge when he is nearby: plant life flourishes, insects swarm, and millions of tiny presences move through the water and air. It is not a dark or threatening presence (though many take it as such), but more as if the swamp itslelf is somehow more alive, more vital, when the Swamp Thing is nearby.

Storytelling Hints: Swamp Thing does not care whether others call him Swamp Thing, Green Man, or whatever title they see fit to give him. It does not change who or what he is.

Swamp Thing is a very powerful changeling, and as such, he does not frighten easily. While he is usually very calm and quiet, his anger, once aroused, is said to rival that of Grandfather Thunder himself.

Both Swamp Thing and Grandfather Thunder were members of the Court of Wrath, but where Thunder focused on gaining power over others and became fixated on taking revenge on their Keeper, Swamp Thing adopted a policy of quiet strength and unbreakable resilience. 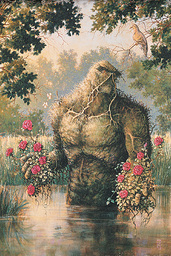