The Duchess of Shimmering Spring (a.k.a. "Vichy Spring"); "daughter" of Isabel Espina, the Queen of True Spring

Background: Maria Espina claims to be Isabel Espina‘s daughter, and the Queen of Spring has never publicly denied the claim. Whether the claim should be taken in the literal, biological sense or a more metaphorical one has never been clarified by either woman. Maria remembers (or claims to remember) little of her time in Faerie or of her life before; she emerged from the Hedge in Miami Beach in the early 2000s, just a few years before Grandfather Thunder’s coup. At the time, the Spring Court had a strong presence there, and when a motley of Broadback satyrs in the midst of a bar-crawl of epic proportions found her and saw her resemblance to their queen, they immediately took her to Isabel. Neither has spoken about what exactly transpired in that meeting, but it wasn’t until some years later, after the coup and exile to the Everglades, that Maria began to expressly call herself Isabel’s daughter, a claim which rallied several discontented courtiers to join her in her return to Miami.

It is widely speculated, especially amongst Isabel Espina’s loyalists, that it was only the Espina name which lent and credence to Maria’s exodus; had her name been Maria Rivera, they sneer, she would have been lucky to convince even one changeling to return with her to the city. While this theory may be a slight exaggeration, it is certainly not entirely without merit.

Description: Maria is a short, slender Latina woman with full, luscious features and tightly curled hair that reaches her shoulders. In her mortal guise, her skin is the color of light coffee, contrasting with her dark, almost black eyes and cinnamon hair. To the eyes of the fae, her hair takes on an iridescent quality, shifting between blue and red and all the colors in which roses can be found. Her ringlets tighten up and twist into more complex patterns, making her hair resemble a flowing mass of roses in various stages of blossom. Her scent is that of a rose garden in the height of bloom.

However others see her, Maria is always dressed in the trendiest and most revealing outfits in the South Beach club scene. She favors blues and reds and blacks, and is almost always accompanied by one or two hangers-on, whether mortal groupies or changeling cohorts.

Storytelling Hints: Maria fancies herself a savvy politician and skilled leader like her mother, a delusion bolstered by the fact that she “persuaded” Grandfather Thunder to give her and her followers South Beach, but in truth she is more akin to the queen bee of a high-school clique: she leads by sheer force of personality, good looks, and the reputation of her name. 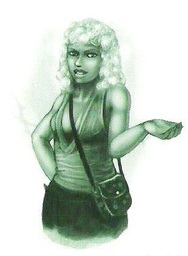