Background: Jim never talks about his Durance, or his life before he was taken. Ever. With anyone. Though he is a “ghost-face” (white man), Jim has the respect of both the Miccosukee and Seminole tribes, for his outstanding ability to survive, and even thrive, in environments which might overwhelm even their most wilderness-savvy men.

(None of the following is to be known by anyone but Jim)
The Taking
Jim’s spent only a few short years in the mortal world. His parents were kind and attentive to the boy, and he lived a normal life in suburbia. At age eight, he was an energetic boy, eager to explore the large, wooded area near his house, which he did. But one one trip into the deep woods, he rounded a large tree to find himself face-to-face with a black figure. Not a man, not an animal, not even a real thing. The… being was little more than a looming shadow, a lightless shape that looked like a sharp-edged hole in the light itself. Of course, James ran. The shape haunted him, looming out from behind trees and out of bushes, herding him deeper and deeper into the woods. It felt like forever before James realized that he wasn’t in his forest anymore.

The Durance
The thing caught him when he stopped to look around, and it tore into him mercilessly. He was hideously wounded, and would have died were it not for the strange magic of the place that kept him alive, and slowly healed him. Everything here was alive, vibrant, bursting with life. It was like an alien rainforest, with strange vines, thorny plants, and bizarre creatures lurking on the shadowy ground level. For days, James wandered this wilderness, trying to find his way home, eating abberant fruits and jumping at every sound. The beast found him again, soon, and again it nearly slew the boy, but the forest kept him alive. Over the years, this was the pattern. James would run through the endless forests and the beast would catch him, again and again, inflicting terrible wounds before wandering off again. the beast never spoke, but James began to suspect that the thing was hunting him. Jim learned to survive there, though the very forest itself worked against him. He learned how to hide from the beast, to prolong the gaps between his beatings, though the beast always found him again. And slowly, through it all, he learned of fear.

The Escape
Jim’s endless torture session had been going on for many, many years. The frightened boy grew into a frightened man, and a very large one at that. There was no true way to keep track of time in the forest, the sun invisible behind the canopy of brambles, so Jim had no way of keeping track just how long he’d spent in the forest. He’d tried to build himself a shelter several times, but the beast seemed to hold a particular hate for structures, and the beating was always worse when it caught him. But Jim lived on. One day, the beast hot on his trail, he came upon something he’d never seen before. A bush of a strange sort. No leaves, just brambles. thinking he could use them to slow the beast, he went to pick some, only to find the beast the bush was deeper than it should have been. He felt oddly compelled to check it out. HE pushed in deeper and deeper, fighting through the thorns tearing at his skin, drawn on by something he didn’t quite understand. A forgotten memory, perhaps. then, the thorns thinned, and he found himself in the hedge. Little better than an animal at this point, he kept fleeing, still hoping to prolong the wait befor the beast found him again. The hedge was different from the forest, though, and in the weeks and months ahead, he found himself learning the ways of this area. When the beast didn’t find him after several weeks, he tentatively began to clear a patch of hedge for himself, a small area below some trees that had grown together.

Rediscovering Humanity
Eventually, entirely by accident, Jim stumbled upon a seminole changeling who was gathering goblin-fruit. The old man brought the nearly-animal manchild out of the hedge and helped him remember how to be a human. Slowly, with the old man’s wisdom and guidance, his mind began to return, but progress was slow. It took weeks before he remembered his name. Months before he could speak properly again. At the same time, the old man told him about changeling life, the things that made them different from humans, and such. In just under a year, Jim was ready to be a proper human being again. He stayed with the old man until he died a few years down the road. With him dead, there was nobody left who knew how frightened and weak he’d been when he’d first emerged. And Jim vowed he would never let himself be vulnerable again. He decided there were two roles one could take. He could either be the victim, or the victimizer. And he chose to be the one that others would fear.

Description: Jim stands out like a sore thumb in any situation. Well over seven feet tall, it’s utterly impossible for him to blend into a crowd. He’s lithe and muscular, not particularly bulky, but definitely strong, and he moves like a huge cat. He dresses almost exclusively in the hides of animals he’s slain, most often reptiles. He’s gone through a python-skin vest, a full trench coat made of alligator, and currently, a suit of armor made of blackgator hide. He spends most of his time in the everglades, which means he usually smells exactly as you would expect him to. Recent events have led to him being washed, mostly against his will, a few times, so the smell is not quite so pervasive.

Storytelling Hints: Jim is not particularly fond of most people. He holds a particular dislike of crowds, politics, and people who try to engage him in lengthy conversation. He understands the value of human contact in keeping his mind intact, and as such joined a local motley, The Brotherhood of the Willow, during their pursuit of the Slender Man through his territory. He trusts Jack to a certain degree, as the two tend to work together well. He lets him handle the talking and negotiating, and Jim does the killing. He begrudgingly trusts Alexandre and Caden, the other members of their motley. 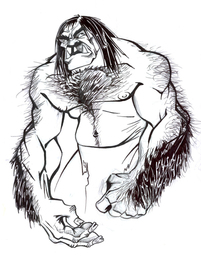