King of the Court of Winter

Quote: “I can move seven keys from Columbia by this time next week. The question is: can you pay what I’m asking?”

Background: When La Llorona was killed during the Liberty City riots, Jeremiah Sleet took over operations for the Winter Court. The Silent Arrow likely owes its continued existence to his leadership and ability to unify the disparate courtiers of Winter.

Sleet has watched for too long as Winter tried to earn itself a place in the Trident, only for its courtiers to be ridiculed, pushed down, and hunted like animals by the more powerful Courts. Let Spring and Autumn lick their wounds and nurse thoughts of vengeance; let Summer stick its collective neck out and draw the ire of the Others. Jeremiah Sleet will do what Winter does best: disappear, survive, and wait. Let them forget that the Silent Arrow even exists. When the Cousins come and carry them all away, then Winter will truly reign in the City of Endless Summer.

Description: Jeremiah is a blade-slender black man in his mid-40s, with close-cropped hair already faded to stark white and eyes so pale they look rheumy. He tends to dress stylishly but not ostentatiously, favoring shades of white and cream.

In his fae mien, he resembles a days-dead corpse: ashen skin with a bluish undertone, blank, clouded eyes, and a cold, clammy touch. A still, icy patch of cold hangs around him at all times, and colors seem to mute to gray in his presence. The bone and pewter crown of Winter sits heavy on his head, and when he speaks, all other sounds seem muted as though by a heavy snowfall.

Storytelling Hints: Jeremiah Sleet runs his crew with a firm, guiding hand and a ruthless pragmatism that befits the heart of Winter. Loyalty is tested frequently, and failing a test means a severe beating if the offender is lucky. Outright traitors (more often to the cops than to another Court), by order of Sleet himself, are never so much as touched by the Court of Sorrow’s enforcers. Invariably, before the next new moon, the traitor’s body is found frozen stiff, with a rictus of agonized horror etched forever on his face.

On the other hand, Sleet looks after the loyal members of his Court as if they were family. The rest of the Courts turned on them, Sleet reasons, so all the Silent Arrow has to depend on is itself. 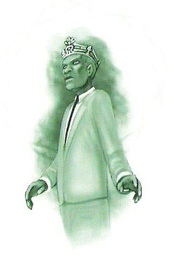