Queen of the Court of True Spring

Background: One of the three original founding rulers of the Trident, Isabel was the most fervent supporter of Tom Hood’s vision of a changeling society. As one of the oldest Changelings in Miami, she commands a great deal of respect. Within her own Court, she has attained an almost mythical status, especially since she and her most devoted supporters vanished into the Everglades, shortly after Grandfather Thunder’s coup.

Description: Isabel is a striking woman who appears to be in her late 30s. Once, she was invariably dressed in the latest fashions and projected an aura of serene self-confidence, but these days her exile has worn on her greatly. The few who have seen her have said she is haggard and drawn, with age and the weight of her struggle lining her face and clad in the travel-stained remnants of her finery.

To mortal eyes, Isabel is a tall, statuesque woman with long, light-borwn hair and strikingly sharp brown eyes. She has full, naturally red lips, and skin as soft as rose petals. In her fae mien, her skin takes on a slight bluish tinge, and her lips deepen to dark midnight blue. Rose stems twine around her limbs like green wire, but somehow the thorns never seem to prick her. The Mantle of Spring enfolds her in verdure; the air around her always smells of fresh-mown grass, and flowers spring up from her footprints when she walks. A crown of twined roses chased with silver shines on her brow, marking her as the Queen of True Spring.

Storytelling Hints: Isabel conducts herself with a regal bearing whenever she’s in public, but the strain of her years in the ’Glades, as well as the galling need to accept what she sees as charity from Autumn, has has put a certain stiffness in her back and an edge in her voice. 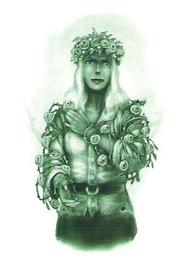