King of the City of Endless Summer

Quote: “I’m very sorry you feel that way. Perhaps we can find an… alternative way to resolve your grievance.”

Background: Grandfather Thunder may well be the oldest and most powerful changeling in Miami. He is certainly the most temporally powerful, and the oldest changeling known to be active. Already a respected figure in Miami even before Tom Hood returned from Europe, Grandfather Thunder was initially a strong supporter of the seasonal Courts. It was only as the years wore on, and the respect and awe he’d held in the days before the Trident lessened, that he began to grow discontented with his lot. The coup came as a brutal shock to the entire city, and it was in large part that shock that allowed him to seize power so completely. Now, he just has to hold it.

Description: Grandfather Thunder is a wiry, imposing man who appears to be in his late 60s. He favors tailored suits and Italian leather shoes, and tends to dress in dark colors with a single, striking accent – a charcoal suit with a sky-blue tie, for example. In his mortal mien, he has a thin fringe of gray hair and a deeply lined face with dark brown eyes.

His fae guise is similar, but his hair deepens to the bruised black of a thundercloud, and lightning flashes in the depths of his eyes. A phantom smell of ozone surrounds him, and the fiery crown of Summer hovers over his head. Whenever Grandfather Thunder enters a room, the temperature seems to rise by several degrees – perceptible even to ordinary mortals, as his powerful Wyrd cannot be entirely contained by his Mask. When he grows angry or is in the presence of sufficient wrath, a faint halo of St. Elmo’s fire flickers around him, leaking through the Mask as well.

Storytelling Hints: Thunder’s rulership takes a page from the Caesars of old: give the people bread and circuses to placate them, give them largely free reign to do as they will, but punish any dissension with brutal efficiency to discourage any repeat performances. 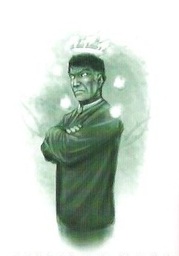