Background: Before he met The Corporal, Caden was an uneducated, rapidly-aging man, eking out a meager existence as an unskilled laborer. He would drift from job to job, moving from place to place wherever there was work to be had. One night, while drinking after-hours with some colleagues, their lives were forever changed by a drunken dare. Caden, showing off his impressive physical fitness for a man his age, was taunted by a younger colleague that he was getting old. Given courage by the booze, Caden decided to show the young upstart what was what by applying to join the Marines, at the recruiting office across the street. Caden invited them to follow him across the street to watch as the doctors pronounced him “combat-ready.”

Reeling drunk, the men staggered across the street and Caden began pounding on the door of the dark office, laughing and ordering the “grunts” inside to let him in. To their great surprise, the door swung open, and a voice beckoned them inside.

Caden spent his Durance as a soldier in the Gentry’s ragtag army of unwilling conscripts. To ensure they conducted their covert operations in absolute silence, the Corporal cut out their tongues, forcing them to communicate only through hand-gestures and sign language. For four years, Caden fought amidst a rotating cast of raw recruits and grizzled veterans, fighting a war that none of them understood, perhaps not even the man in charge.

{This is where the White Lady comes in. I’ll fill it out later, promise.}

As The Corporal gazed out over his troops the next morning, he realized that they had all fallen as silent as the grave. Silently, in the same moment, every soldier drew his weapon, and a hundred blades and bullets flashed in the fading light.

The battle lasted for hours, and almost as many soldiers fell from the bullets and knives of their fellows as from The Corporal’s own vicious attacks. As darkness fell, those who survived felt their foe weakening, but rather than press on in Arcadia, they managed, somehow, to make a tactical withdrawal to the Hedge. None were sure how they left their master’s demesne, but they pressed on through choking jungle and boiling swamp, always one step ahead of the one-man army which pursued them. Many fell, and many became lost in the tangles of the Thorns, never to be heard from again. Caden was separated from his comrades during the long march: to this day, he does not know if any others returned to the mundane world alive.

Badly shaken by his experience in Arcadia, Caden began to look for a quiet, easy job. He found what he was looking for at the University of Miami Hospital, where he came to be a respected member of the staff, despite lacking any sort of official title or training. His “service” in Arcadia left him well accustomed to losing people he was close to, and his ability to get close to patients who had just lost loved ones made him popular with both staff and patients.

Description: Caden is a thin, middle-aged African American man. His hair is graying at the temples, and his eyes are always touched by a faraway hollowness. His fingers are extremely knotty, which gives him the appearance of being much older than he is. However, his hands are very dexterous; he never drops his knife, and it always finds its mark. Caden’s hair is close-cropped and ashy gray. Even in his Mask, Caden’s skin looks dry and ashy.

In his true mien, Caden’s dark skin appears to actually be smeared with ash. At times, the shifting patterns of gray, white, and black can appear to resemble camouflage, but for what burned-out wasteland this pattern would be useful, none are certain. His limbs are even longer and thinner than in his Mask, and his joints are knottier, almost resembling the twisted roots of some tough, woody plant.

Storytelling Hints: Despite his haggard and sorrowful appearance, Caden is a kind and generous man, and frequently goes out of his way to help the unfortunate and downtrodden. Caden believes that the only way to truly heal from life’s tribulations is to recognize sorrow (both in others and in oneself) and to allow this sorrow to be fully expressed. At the hospital where he works, he often comes across people grieving over lost loved ones, and he tries to help these poor unfortunates by giving them “a little supernatural nudge” to help them deal with their grief. 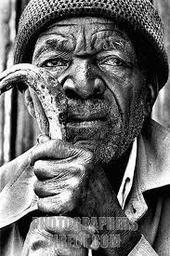