Manipulative beauty with a silver tongue.

Background: Blue Jenny is a reclusive Winter courtier who spends most of her time in her Hollow, sending a rotating cast of servants and flunkies into town to gather supplies, collect favors, and do her dirty work. Most of these poor souls (including Rollo) are her former lovers and playthings, their hearts broken and cored by Jenny’s callous manipulations. As a Duchess of the Icebound Heart, Jenny gains mystical powers over anyone whose trust she was betrayed or whose heart she has broken.

Description: Jenny is a tallish, statuesque woman. Her pale blue hair hangs down to the middle of her back, and is adorned with what appear to be stylized snowflakes. She projects an almost-palpable aura of sorrow, but the blue veil she wears hides her true emotional state. Behind her veil, strings of glittering, frozen tears cling to Jenny’s soft, pale cheeks.

Storytelling Hints: Jenny is aloof and seductive, hiding her true thoughts and emotion behind veils, masks, scarves and other face-concealing accessories. He is very good at getting what she wants, and doesn’t care who she hurts in the process of getting it.

Hollow: “As you enter the clearing, where an elegant manor house rises out of the marsh. It is covered in the thick moss that grows on the mangroves and rocks around you, and seems to be on the verge of sinking into the marsh that surrounds it.” 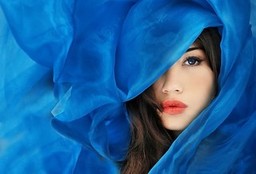