Pensive quartermaster of the S.S. Gossamer

Quote: “I’ve got a funny feeling about this. Maybe we oughtta think about it for a moment, before we do something rash.”

Background: As quartermaster, Seaman Trenton is in charge of setting the Gossamer’s course, calibrating machinery, and generally making sure everything runs smoothly. In times of emergency, she is called upon to perform first aid and provide triage care for the wounded.

Description: Bertha is tall for a woman, and hefty of build. To mortal eyes she’s big-boned, but to the fae she’s just big. Despite her size she has a calming effect on those around her, and her slowness to judge is considered both a blessing and a fault by the other crewmen of the S.S. Gossamer.

Storytelling Hints: Bertha can come across as bland or simple-minded, but she sees a lot more than most. She’s very intuitive, and dislikes conflict. As such, she often plays the peacemaker when tensions run high. 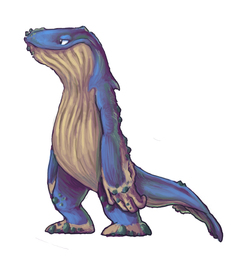